Yes, I’m a day late.. but I’ve had writers block (due to the shockingly overwhelming response that Wayne received).. Green eyed monster is sleeping – for now…

Without going back to the Antichrist blog to see exactly where he left off, I’m pretty confident we had just arrived in Atherton and spent the day checking out all the waterfalls. Such a pretty place, and the scenery is etched in my memory for always. We also spent the day at Lake Barrine and Lake Eacham. We did a boat tour of Lake Barrine and it was surprisingly very interesting. A quirky lady was the boat driver and she kept the girls entertained. We learnt about turtles, eels, ducks and even pythons. The plants surrounding the water’s edge were magnificent (I know.. just plants but I’m serious).. After the cruise we had lunch overlooking the lake and basically we could have stayed there for hours. It was very peaceful..

After lunch we went for a drive and ended up at Lake Eacham. Wayne had the Kayak still on the roof, so a perfect opportunity for him to go for a paddle and the girls a swim. I didn’t take my bathers so was a little unprepared for this impromptu swim, but I found a large tree and soaked up the sun with Miss Frankie, until she also got to jump in the kayak with her Daddy. We had been told about this lake, a ‘must do’ before we left the tablelands.

Wayne and his Kayak

Still in Atherton… We also went to a town called Mareeba where they make coffee and chocolates, and spent half the day at a place called ‘Coffee Works’. You pay a certain amount of money and you can have the run of the place, tasting as many coffee blends, tea and chocolates. They have a huge display too where they have coffee and tea memorabilia from around the world. It’s a self guided tour with a hand-held audio speaker which the girls loved. I loved the gift shop and spent accordingly!

This is the day we also visited the Fig Tree and the Cathedral Tree. . I’ll let the pictures do the talking.. WOW ! 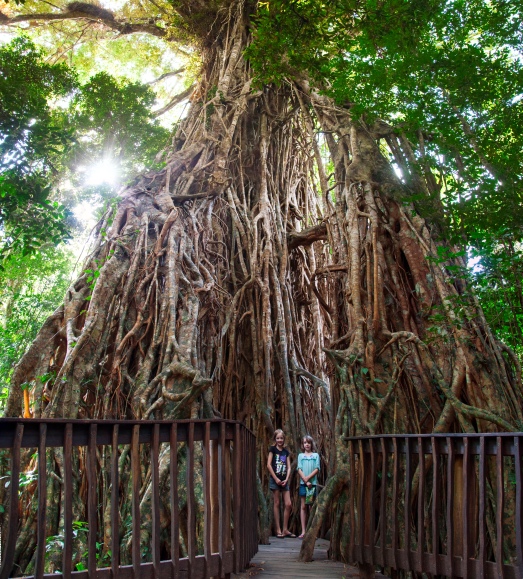 This wasn’t somewhere that we had planned on visiting, but after meeting a few people who had recently been we thought the 300km trip may be worth it. We arrived late afternoon and the first thing we did after setting up was go for a swim. The pool at the caravan park was beautiful and the best one we had swum in so far. The girls were very excited as it wasn’t freezing like the others and even Frankie got in. Sarah was impressed with the parks bathrooms too. It’s all about the bathrooms with Sarah, I wonder where she gets that from ?

After our swim we drove into Cooktown down to the docks and Wayne chatted to the fisherman (still yet to catch a fish) we watched the sunset and then got some fish and chips for tea. We had 1 full day to explore the town so we got up early (early for us) and went to the Captain Cook Museum, Heritage walk through the cemetery and also visited the lighthouse lookout. The Museum was pretty good, although I found the Aboriginal stories a lot more interesting than good old Captain Cook! The girls were pretty impressed with the Anchor though and also the dentist equipment from years gone by… they are funny little kids.

The view from the lookout was breathtaking ! The water a gorgeous turquoise colour, shame we weren’t allowed to swim.. Bloody Crocs !

Another little town that we are glad we made the effort to see. 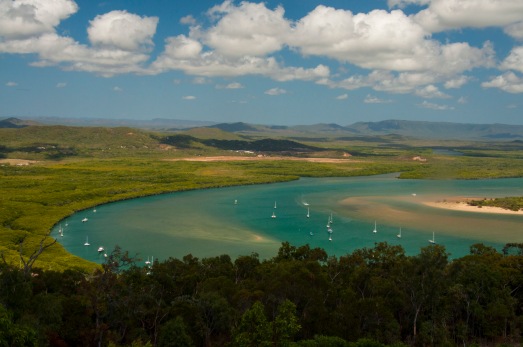 View from the lighthouse

We left Cooktown and are now in Port Douglas. Rather than split PD in 2 blogs, I think I will wait for next week. I need to start writing these blogs earlier in the day, I’ve clearly lost my MOJO this week (thanks Wayne) but I do have some special mentions : Paul – I will do a spell check and Hayley – Now you’ve commented on Wayne’s blog, you’ll have to do the same for me.. It’s just the way it is 🙂

Thanks for reading.. Until next time, The traveling Morrells