Ok, I’m almost up to date with the blogs.. Currently we are in Melbourne, but I am only about a week behind now.

On the 2nd of Jan we left Sydney, a little teary too. I hate saying goodbye and after spending almost 5 weeks with family and friends, I knew it would be a lot harder to leave this time. Seeing my mum standing in her doorway too sad to come out to the car one last time, my little niece Eliana’s bottom lip start to tremble and then the tears flowing.. seeing my girls crying in the car.. It was hard. However, this is the reality of our life. We live in Perth and are always saying hello and then goodbye !

Driving to Canberra, I was trying to get the girls excited. Wayne didn’t want to go to the ACT. He goes there enough for work as it is, but I wanted to show the kids where they were born, the house we lived in and of course Parliament house and Questacon ! Once we got closer we started to call some caravan parks. Bad news.. Summernats was on ! Completely forgot about the ‘car festival’ shall we say .. that is on in Canberra every New Year. Every single caravan park was booked solid for the week. Luckily Waynes ex work colleague and friend Tony and his lovely wife Rene were more than welcoming and we were able to park in their driveway and set up !

Once we arrived in Canberra Wayne started to get his groove on. He was pointing out places, answering questions that the girls were firing at him. We only 3 days to explore and one of those days was the day we arrived so as soon as we set the van up, we were off. We first took the girls to see my Great Uncle and Great Aunty (Marie and Frank) who we hadn’t seen since we left Canberra almost 6 years previously. They were very happy to see us, as well as meeting little Frankie for the first time. Next stop, our old house. As we drove up the street I almost didn’t recognise the house we lived in. It has completely changed. It’s been rendered and a new roof, an extension.. We couldn’t really park and gawk at it of course, but we had a good peek ! When we lived in Canberra we had the best neighbours in the world.. Celia and Graham, and Felicity and Cliff. . Lucky for us, they both still live there, so we suprised Celia and Graham with a knock on the door and within minutes we were on their back deck with a wine in hand. They were so very friendly to us when we first moved to Canberra, and I spent many hours over at their house, having a cup of tea, getting parenthood advice and then some ! Great people, many happy memories and it was so lovely to see them. We made plans to catch up the night before we left too as Cliff and Felicity were coming home from Melbourne. We said goodbye, and then drove back to our Van, got some chinese for tea and went to bed shattered !

Next day, up bright and early. A quick coffee and chat with Tone and Rene, the kids had a quick swim and then we were off to Old Parliament house. I love this building, more so than the new Parliament house. This is the part of Canberra that I love. I love the view from New Parliament House, down to Old Parliament House and then onto the War Memorial. We had visited these places so many times when we lived here, as everyone who came to visit us we of course took them to see the sights ! The girls got to see the ‘house of senates, and the house of reps’ and also watched some footage of PM Julia Gillard when she was younger. I don’t remember being at all interested in politics when I was their age, but the kids today seem to be taking more of an interest, which I think is truly wonderful.

Unfortunately we didn’t get time to take them to New Parliament House as we were meeting friends for lunch. We decided that due to time restraints we wouldn’t take them to the War Memorial ( we did a drive by)  the girls are still a little young and it’s such a huge place that you spend almost half a day in.. We just didn’t have time to do everything.

Early on in our trip, in fact the first week in Kalgoorlie we met a lovely couple Margaret and Kevin from Canberra. They were also travelling around Australia and we ended up travelling along the Nullabor with them and also spending some time together in Streaky Bay SA. We had said if we go to Canberra then we would catch up for lunch and meet some of their family. I’m so glad we kept in contact, as they are such lovely people. We had a delicious lunch, got to meet 1 of their daughters Georgie, plus 5 of their grandchildren. The girls were happy to see them again too. It felt like a long time had passed, but it had only been just over 4 months.. time is flying by !

That night we spend time with Tony, Rene and the kids. More swimming, bbq for tea and then Frankie and I retired to the van early, while the big girls and Wayne hung out inside the ‘big house’ watching movies and catching up.

Following day we had to get the car serviced. I was pretty annoyed that Wayne had booked it in on the one and only day we had left in Canberra (so much to do, so little time) but we had no choice, it needed to be done. It was supposed to only take 3 hours and by 11am we were going to be on our way to Questacon (a science adventure interactive museum for kids/adults). However, there was a slight hiccup and it was more like 2pm before we were on our way. We still went though, and the kids had fun going through the galleries, sitting in the earthquake house, playing air hockey with a robot and going down a free fall .. we were getting tired though, our time in Canberra was coming to and end and we had packed a lot in. We had dinner that night with our friends Celia, Graham and that was lovely.. It was hot, so the kids ran in and under the sprinkler.. Cliff and Felicity popped over for a drink once they’d come home from Melbourne too, so it was like old times. We said our goodbyes and drove back to the caravan. All 3 kids asleep in the back of the car !

We were now heading to Tuross Heads to meet up with our friends Nat and Nick again. We knew it was a bit of a drive from Canberra, so after another quick early morning swim with their little friends Tara and Luke, we said goodbye to our friends and set off.

Tuross Heads is about an hours drive from Batemans Bay (south of sydney, way south) and we had never been there before. We arrived a day earlier than Natalie and Nick, so we were able to set up, get some groceries and clean the van a bit before they arrived. We were staying 5 nights all up. Olivia and Ava are the same age, Ava is 12 weeks older.. When Nat and I were younger, we used to say how we’d love to have kids the same age, never really thinking that it would happen, so when we were both pregnant together it was very special. Seeing the 2 girls play, laugh, conspire and telling secrets is a really lovely thing and I love that even though we live on the opposite side of the country, the girls are still ‘BFF’s’ and I hope they’ll be friends forever.

Basically, Tuross = HANGING around.. more drinks, more cheese, more laughter and ridiculous conversations about nothing. Swimming, Kayaking, FISHING (nope, not a one) and chasing after Frankie (18 months) and Asher (almost 4yrs old). Sarah, Lu and Ava got along really well too. There were a few hiccups though. Sarah got Gastro and it was quite bad. We were all sitting out the front of our van and the kids were inside the van watching a movie. Sarah had mentioned that she had a sore tummy but that was about the extent of it. Next thing ‘projectile vomit’ everywhere.. all over the floor. It was at this point that Wayne came to realise very quickly that I really don’t “DO” vomit well. I can’t handle it.. I’ve never been great with cleaning it up, and only really do it when he’s not around. So, he had the job of cleaning up ! Not much fun.. I made it up to him though, by sleeping with Sarah.. and yes, she threw up all over the bed too. After that she managed to get it into the bucket the next 8 times. It was at this point that I declared (loud enough for all to hear I might add) that I was WELL  AND  TRULY  OVER  IT … and wanted to go home.. STAT. Wayne wasn’t having a bar of it though. He just gets on with it and nothing seems to phase him. Me ? Everything phases me.. even though I’ve been quite relaxed this trip, being sick in a caravan isn’t much fun ! The whole next day was spent washing sheets, mopping floors and using a can of Glen 20. Sarah came good about lunchtime.

The next day, more swimming and then we hit the country club for dinner. Courtesy bus and all. Was a fun night, until Nick purchased the kids Bingo cards, and the night was all but over !!  The girls (and Nick) were having a great time. Nat ? not so much… and Wayne and I were a little indifferent until I realised that maybe Jack the courtesy bus driver wasn’t going to fit us all in, that I too wanted to bail. The terms ‘ legs eleven, 2 fat ladies and 66 clickety clicks’ will be forever etched in my brain. Thanks Nick 🙂 xx

We also managed to get out for a day to visit a town called MOGO. Full of shops, boutique as well as cheaper places. Galleries, pottery places, lots of coffee shops, ice creams galore etc.. You get the idea. The girls loved it. Wayne and Nick played the dutiful husbands and followed us around all day.

Unfortunately, that evening.. after a lovely sunset, drinks and dinner and a game of Bingo that the girls created, it became my turn to get sick. Same as Sarah, although I know the signs and can make it to the toilet !.. It was quite terrible though and I wasn’t able to travel the next day either. We had to stay 1 more day and thankfully Natalie and Nick also stayed and helped Wayne out with the kids. It was also the first time that the Morrell kids had ‘headlice’ .. I’ve been rather cocky about this at school, whilst other mums complain about their kids coming home with it, I’ve managed to stay clear of the dreaded unwanted creepy crawly.. not this time though. All 3 of them !!! Olivia was the worst and I’m forever grateful for Natalie who had to ‘de-nit’ my kids while Wayne had to wash every single towel, tea towel, sheet and doona cover in our van. What a mess ! And I was to sick to be part of any of it !

We eventually headed off and left Tuross behind. What a beautiful place though & if we lived closer, we would holiday there again. We really have only scratched the surface once again in NSW.. So many places to see..

Off to VICTORIA now… see you in a week xo 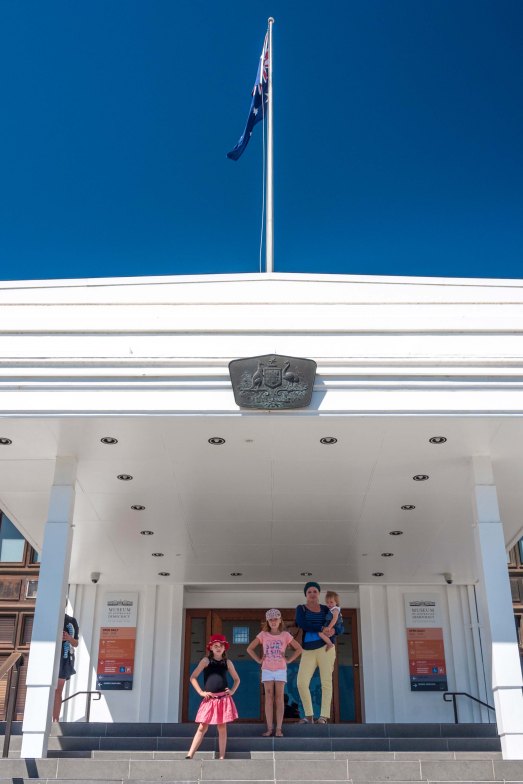 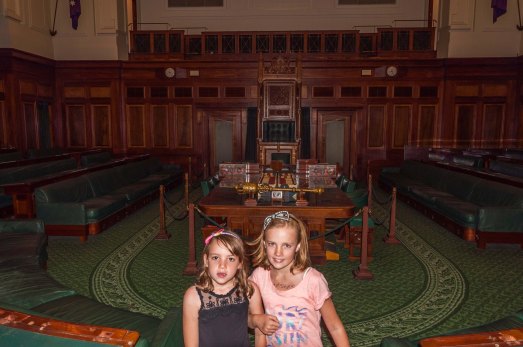 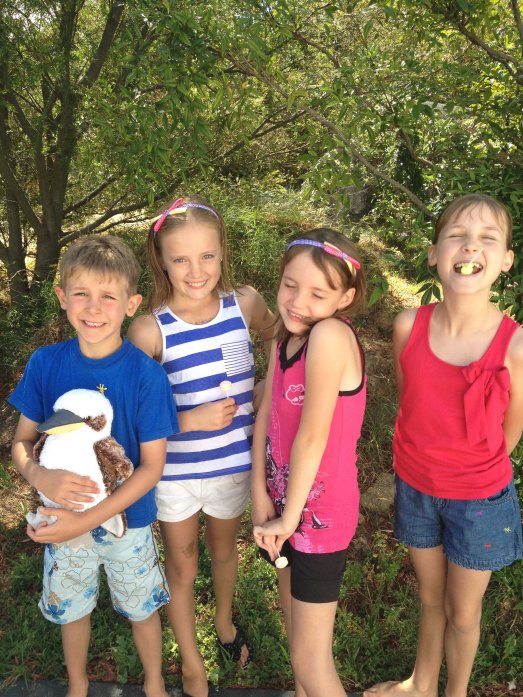 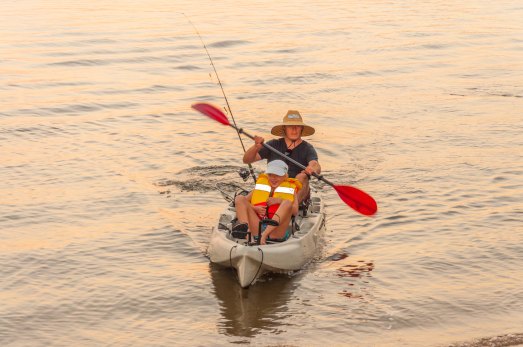 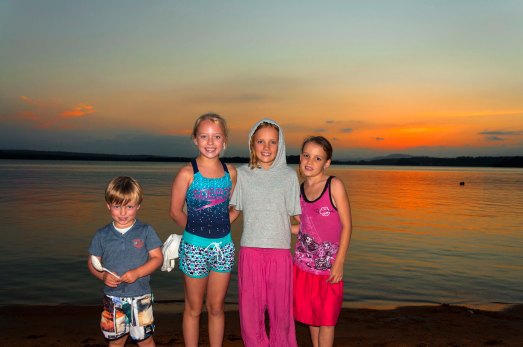