Let’s see how good the old memory is !

After we got home from Towoon Bay, we hotfooted it to Chifley where we spent 2 nights with our beautiful friends Nat & Nick (and their 2 gorgeous kids Ava and Asher) it was great and the kids loved having space to play and spending time with their friends. The adults just hung around, had a few drinks and laughs. We went out for tea one night and generally just had fun. We left Nat and Nick’s early on Christmas Eve to head back to St Marys. Santa had done most of the present wrapping, although there were still a few to be done. The girls were reunited with Eli and they just played together as little girls do. That night we went out to dinner at the Lone Pine Tavern with about 60% of the family and then we went home so the kids could get ready for Santa and his reindeers. Excitement plus ! (Olivia learnt though during this week that Santa wasn’t real, she had known for a while and basically asked me out-right, followed by ‘please don’t lie mummy’ lucky for me she’s a good kid and didn’t make me feel guilty, that will be Sarah’s job.. but I think she’ll believe for many years to come still). We had asked Santa if he could please drop the presents off to my mum and dads house this year, so we could open them up with them and thankfully that’s exactly what he did ! … It was a very early start, well for me anyway. I was awake at 5.45am and was waiting patiently for the kids to wake up.. They didn’t !!! In the end, I jumped out of bed, woke everyone up and we were around at mum and dads just after 6am.. tired ? yes.. hence the baggy eyes in the pictures .. Santa did well !

We spent XMAS lunch at my Aunty Erins and Uncle Joes place in St Clair. The whole family was there and it was AWESOME. It’s been about 4 years since we spent Christmas in Sydney and having such a large family, with cousins and now 2nd cousins, to share the day with really meant a lot. Our girls LOVED it. . They were spoilt by everyone, and they just loved the chaos and noise and laughs. We ate alot and slept well that night !

Boxing Day tradition in my family is to go and see a chick flick. I was glad I was able to be a part of it this time. We went to see Pitch Perfect and I loved it ! Laughed so much.. go see it if you haven’t already.

The next few days were spent catching up with beautiful friends. We went to Rene’es house and spent the day with her and her mum, boys and Matt. More delicious food, laughs and my girls discovered the wonderful world of SKYLANDERS.. thankfully we don’t have our Wii in the van.. Thanks froggy !

I also got to catch up with Melissa, Tone and their 5 kids (#5 being the latest addition at only 10 weeks when we saw her). A very hot day, kids spent most of the day in the pool and I got lots of snuggles from sweet Milly.

Waynes younger brother Brad and his family (Lauren, Layla, Asha and Jai) were coming to Sydney for a holiday so we were able to catch up with them before we left to Canberra. It was so nice to see them all. We live really close to each other back home in Perth and see each all the time. We’ve all been missing them, especially our nieces and brand new nephew (not so little anymore) so it was perfect timing. We met them in Darling Harbour for the day and this time when we said goodbye wasn’t so hard as it’s only a short time before we see them again 🙂

My Sister Belinda lives in Drummoyne and has views of the harbour from her balcony. Wayne had wanted to go into the city to watch the fireworks, but I wasn’t that keen. I’d ‘been there done that’ years ago, and I’m all about ‘the easy option with the kids’ and trying to take 3 girls (Frankie being the most difficult at her age) I wasn’t giving in. Knowing that Belinda lives so close anyway, and that we could see the fireworks from her balcony and stay at her place the night, why wouldn’t we take advantage of that ? We did and it was great. There is a reserve across the road from her unit, so we took our chairs, drinks and food supplies and wandered down about 6pm. There were a few people there, but more as the night went on. Pretty soon Wayne was relaxed as he realised he had a prime view with minimum effort. After about an hour Frankie went OFF .. as in, she wouldn’t sit still, running running and more running.. there is a cliff drop off into the harbour so we couldn’t really sit back .. One of us were on Frankie duty until 9.20pm which is when the family fireworks ended. Wayne was getting a little agitated as he was wanting to take pictures and Sarah was upset because she wanted the pink glow necklace (something like that ) so our relaxed evening became a little bit chaotic and I was glad that we hadn’t attempted going into town. The fireworks were beautiful though and even Frankie sat still long enough to watch them.

We got back to Belinda’s by 9.30pm and we all managed to stay up (apart from Frankie, she was sound asleep) and watch the midnight fireworks from her balcony ! Wayne was happy, he was able to see a snippet of the opera house ! His brother Brad and Lauren went into town though, and had an even better view.. I told Wayne he should have met his brother but his response was ‘nah, couldn’t be stuffed’. SEE.. I knew I was right ! 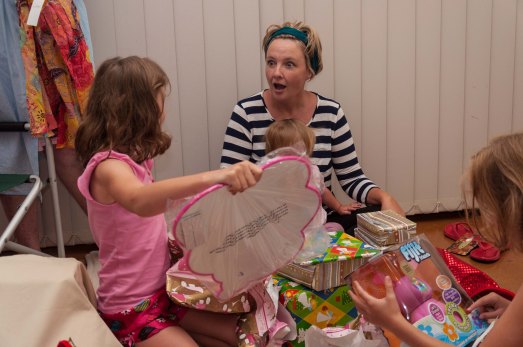 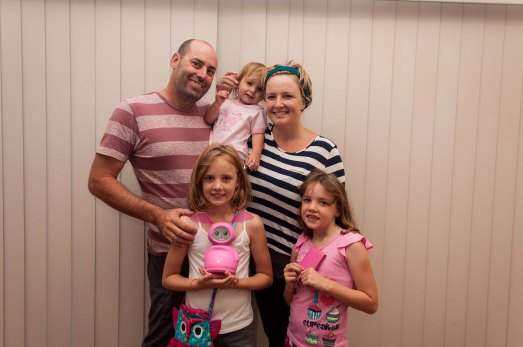 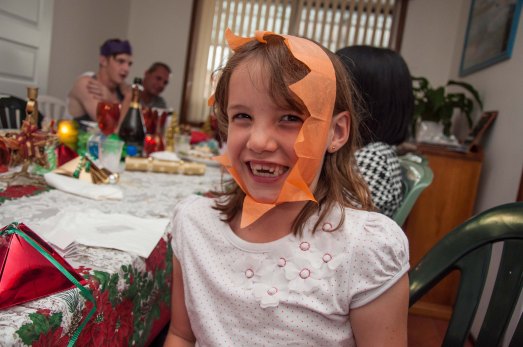 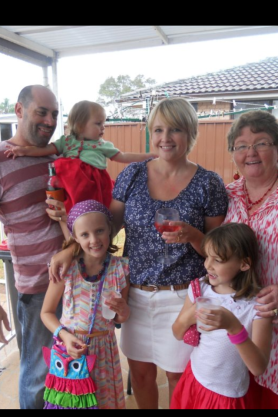 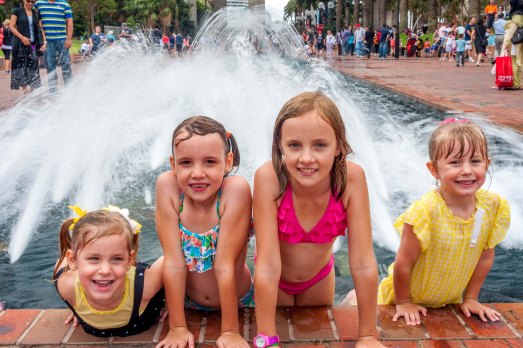 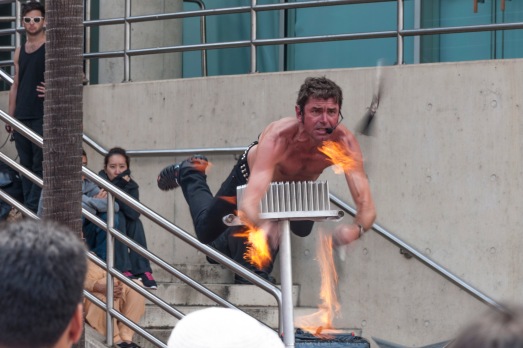 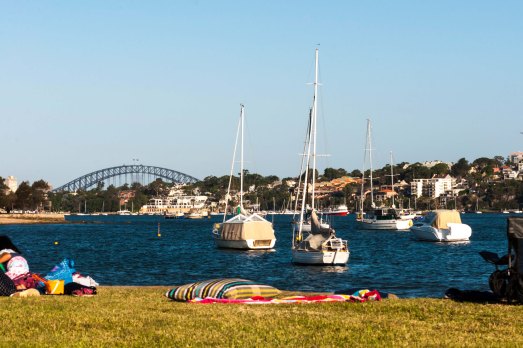 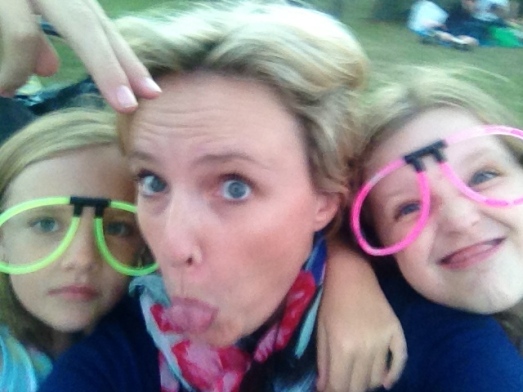 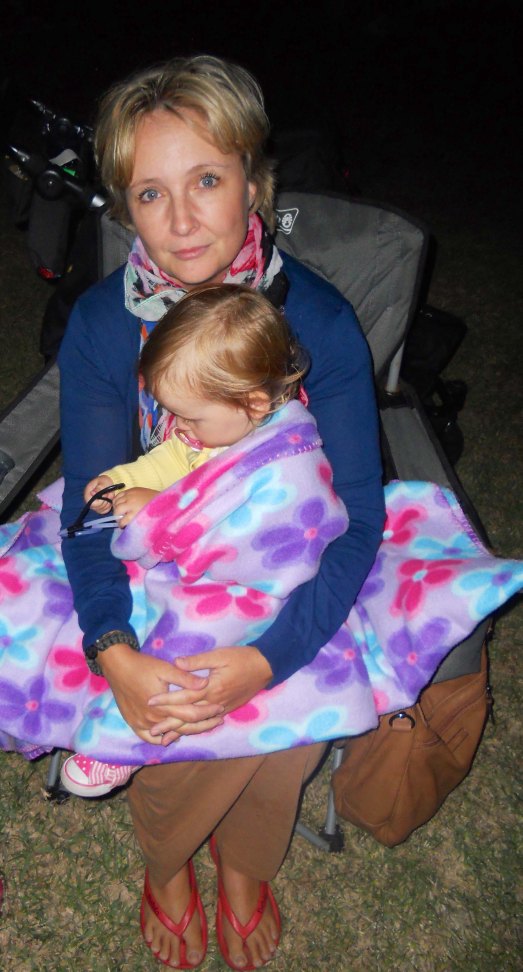 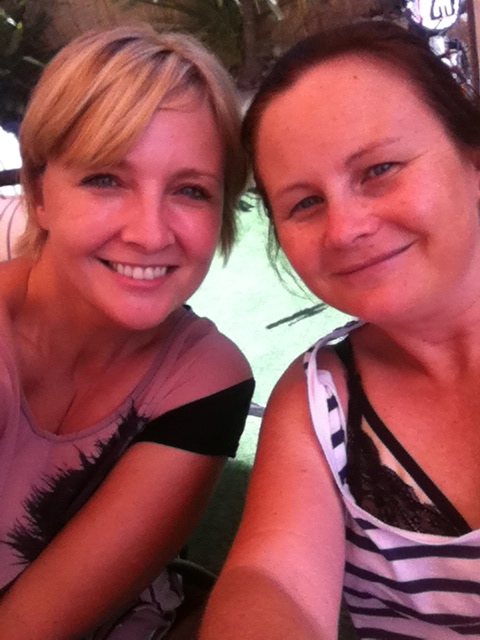