The weeks are whizzing by !

We left Uluru intending to go straight to Alice Springs, but we decided to make the detour to Kings Canyon as who knows if we will be back in this part of the country anytime soon. We only stayed 2 nights and to be honest I felt a little wiped out by the time we got there. We knew that we wouldn’t be able to do all the walks as we didn’t have a backpack for Frankie but thought we’d go and explore anyway.

The first day we were pretty knackered and also had some sad  news from friends of ours, so didn’t really feel like doing much. A swim in the pool, a play at the park and that was about it really. Nothing too exciting.. We got up early the next morning though, packed some lunch and drove the part of Kings Canyon called Kathleen Springs. It was an hour walk that was sealed so we were able to take the pram. It was really lovely and the girls were able to take pictures along the way. The walk ends at a little spring (where the rainbow serpent lives) and it was gorgeous.

Wayne went back out to Kings Canyon later in the day and did the ‘bigger’ walk while the girls and I watched ‘alice in wonderland’ in bed ! Told you we were a little knackered 🙂 That night we walked up to the viewing area in the caravan park where you could watch the sunset over the Canyon, and that was pretty amazing.. Did I mention there were no mice, but DINGOES ? Yep..lots of them.. again, not much sleep for me 😦

Very glad we made the detour..

Alice Springs was our first real ‘large town’ since Port Lincoln, so we were excited to get there for a number of reasons and unfortunately none of those reasons were tourist attractions. We’ve since learned of a lot more places in and around Alice that we should have made the effort to see. We needed to get the van serviced and also a few things serviced on the car and that took pretty much 2 days. We also needed to get the girls some summer clothes and shoes, stock up on groceries etc and that took another day. We were grateful that the caravan park we stayed in was awesome and there were hundreds of kids which meant our girls were enjoying themselves and didn’t really want to leave the park grounds.. We did however manage to visit a few galleries, we went to the reptile centre and we all held a snake.. (will not post my picture because I look so frightened, therefore terrible and I’m VAIN).. we also had a didgeridoo lesson which was fun. Wayne can’t seem to hold his breath and breathe out his nose.. which is why he finds it hard to swim too… so the lesson was fun mainly because of him (and I got to pick a beautiful hand painted blue didge to take home with us). Unfortunately by this time in our travels, we were all (mainly me, but wayne and the girls too) over the red dust and dirt and we wanted to make tracks to get to Cairns ASAP. We stayed in Alice for 4 nights and we enjoyed it, but Alice as a town itself.. I just can’t describe it. In the middle of the day, during office hours Todd Mall is like a ghost town..Not many people around, quiet. . It’s funny how we are so used to noise and activity…Here are some pics ! 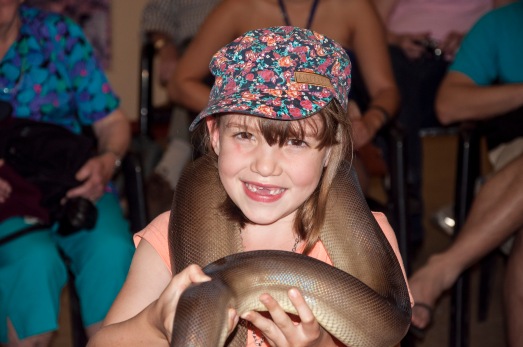 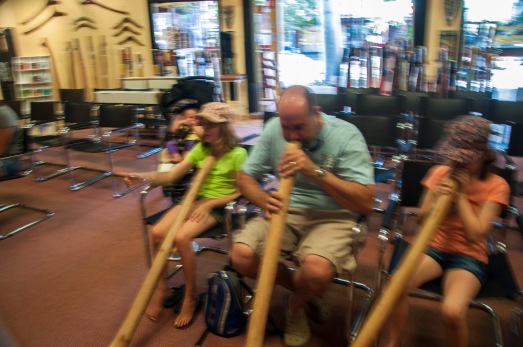 Juzzy – Yes the man is wearing crocs.. there’s no stopping him 😦

So that was Alice Springs… we were leaving bright and early on Saturday morning when our car batter decided to leave us.. so we weren’t able to leave until 10.30am. A massive day in the car as we wanted to ‘free camp’ for our first time at Devils Marbles. We arrived late in the afternoon but we were able to get a spot. Loads of vans were already set up. We went for a walk and took more photo’s of these amazing rock formations.They really were incredible and the girls loved walking through them and taking pictures. Pretty relaxed after that, had some cheese and olives, made some dinner and as we had no power we all had an early night. There was one incident when I had a shower.. I wont go into details, but let’s just say during the course of this shower I swore black and blue that I was NEVER free camping again. I did however ‘get over it’. 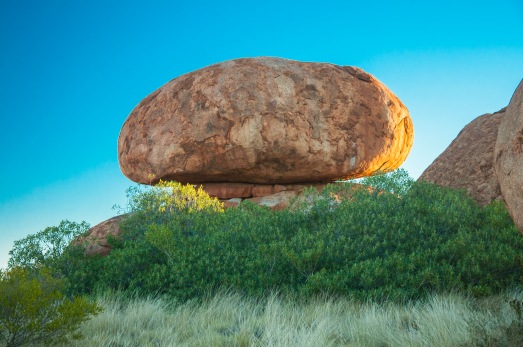 Photo’s don’t really do them justice. There were hundreds of them. All shapes and sizes just plonked there !

So that’s all from the NT… Feels like we have been in the Northern Territory for weeks, although to family and friends that we’ve spoken to it seems to them that we’ve been in and out of places really fast !.. There has been a lot of driving with not much in between. Thank goodness for dvd players, the Ipad and ‘conversations’ with Richard from ABC..

I’ve been writing this blog for almost 2 hours and I’m exhausted today. I apologise if some things don’t make much sense or if the pictures aren’t in order. Our internet connection here isn’t the best and it’s very slow.

The traveling Morrells x (being super slack and not doing a spell check..oops)