We left Streaky Bay bound for Port Lincoln which is where our caravan window was to be replaced and fitted. We received a nice surprise when we rolled into Port Lincoln Foreshore Park. Not only was the sun shining, there was green grass and a playground right opposite our site. The ocean was beautiful and Wayne was happy that the jetty was only metres away (he spent a lot of time (and I use this word loosely) FISHING.. no bites as yet 😦

The girls were happy to just sit in the sun on the first day and play in the sandpit and on the playground. The following day was again rainy and windy and basically just freezing. We went into town though, and took the girls to the visitor centre, and another playground.. Did some groceries and did a little sight seeing. The following day our window was repaired and we said goodbye to Port Lincoln. A very short visit !

Canola Field on the way to Port Lincoln. Beautiful drive.. 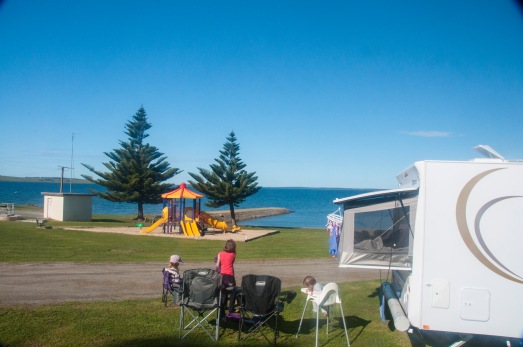 I was looking forward to going to Whyalla because it’s a huge town and I thought that there may be some ‘excitement’ about the place. Once again, we picked the wrong time to come. It was not only cold, but a little miserable. The caravan park we stayed in was filled with Miners (nothing wrong with that) but the place was a little ‘ferrel’ and very noisy. We had decided in Port Lincoln that as much as the Eyre Peninsula is pretty incredible, we wanted to escape the cold and get into the warmer weather ASAP, so again it was a very quick stop. We arrived in Whyalla quite late in the afternoon and once we set up we realised that a couple of our wine glasses broke. Not due to the speed or the shaking of the van either, the cupboard wasn’t shut properly (uh-oh) .. It took ages to clean up, little shards of broken glass were everywhere.. we made a quick dinner, quick shower and in bed for a bright and early start the following day.. We took the girls to the Maritime Museum on the way out of Whyalla though, so we did 1 tourist attraction ! 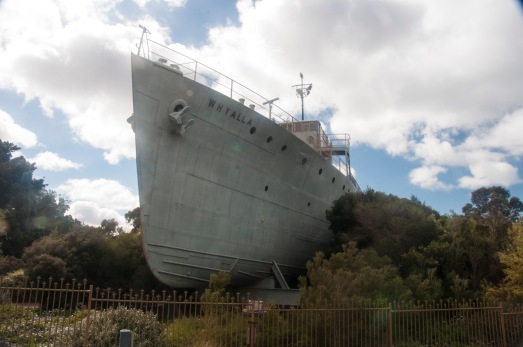 As soon as we drove into this town, something didn’t feel quite right and both Wayne and I thought the same. We had no choice but to stay here though as it was the closest town to Coober Pedy and we’d been driving alot. The town has 180 people living there, although we didn’t see more than 3 people. Lots of houses, no cars though and it just felt weird. The caravan park looked really dodgy, with a few rundown apartments etc.. but the owners were nice and friendly. Very cheap and the toilets were clean although I used my own shower as we had water (YAY).. Woomera was a secretive military base, secretive in that you weren’t allowed into Woomera unless you had a reason. There is still is a military presence there though and as it’s in the middle of nowhere with lots of desert around, makes for a perfect space for blowing things up (training of course) and pre-deployment training for Afghanistan. They also test rockets launches and the likes. There is a public display of rockets/planes etc.. but not much else. . Not sure what else to say, it was a little eerie..

Coober Pedy aka the BIG SMOKE

Where to begin? I’m sitting here now in CP, on our last night. The girls are all asleep as they’ve not stopped playing in the playground and it’s been in Coober Pedy that they’ve finally overcome their shyness and have made a million little friends. Frankie has taken her first steps, Wayne has once again made friends with every single Grey Nomad in this place and now knows everything there is to know about caravans, toe hitches, brakes etc etc etc. The caravan park where we are staying is the first one you come to on Stuart Highway, about 2kms from the town. We chose this one mainly because it has a ‘pizza bar’ attached to the park which is also managed and owned by the same people (Greek couple who moved to Melbourne from Greece, opened up a few pizza bars in Melbourne and then decided to try their hand at ‘opal mining’ so moved here and basically stayed).

This is the first place we’ve stayed more than 1 night where we have had NO WATER. And by that I mean, only our own tanks. You have to pay for the shower (cheap – 20c per 2 minutes) and they charge a ‘staggering'(Waynes word) $6 a load for washing (We’ve done 5 loads).. It’s very red and dusty…So that’s the caravan park.

Coober Pedy itself is strange, in my opinion. We’d been told by other people we’ve met along the way that Coober Pedy is a ‘rest stop’ at best and that we should just ‘keep driving’. I don’t agree with that, although I wouldn’t say I’ve enjoyed myself here either. The town is full of burnt out cars, abandoned homes, rubbish on the side of the roads. No one is strolling down the streets taking in the atmosphere. The underground houses that are amazing are UNDERGROUND so you can’t see them.. We did do a tour called the ‘old timers mine’ and that was very interesting. Hard to imagine how the men worked these mines and the conditions they had to work with, the OPAL is unique in that Australia has 85% of the worlds opals and Coober Pedy is the place to be if you want to get your hands on some. We also saw how a family in the 60’s lived underground, and they had everything we have now. Bedrooms, kitchens, bathrooms.. again, very hard to imagine firstly building it, and then living in it. The girls were very impressed with the tour (probably because they got to wear a hard hat). We also drove out to the Breakaways (pictures to follow) in a word BREATHTAKING and Wayne could have stayed there for hours if he didn’t have Sarah in his ear saying ‘Daddy, are you serious? We drove all this way to see just a ROCK’? (and she is the child who is the most keen to see Uluru, hope she isn’t disappointed).

I’m glad we came though, it’s a place we wanted to see and I won’t forget it. I also won’t forget the pizza we had, which was possibly the best one we’ve ever eaten 🙂 … we stayed 3 nights mainly due to the fact that the weather was lovely, and we were able to wash all our linen and do a bit of cleaning. For some strange reason I thought the housework would stop ! Off to Marla tomorrow making our way slowly but surely to ULURU. 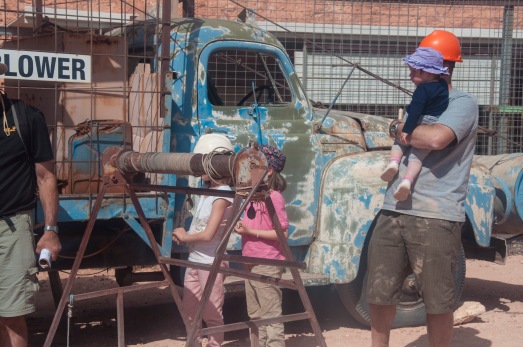 ‘Blower’ machine at the ‘Old Timers Mine’. 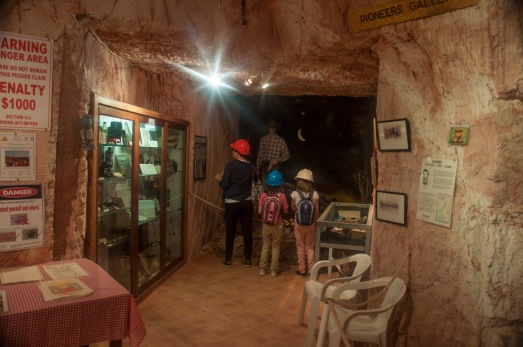 Inside the ‘underground’ museum.

1960’s underground bathroom, belonging to a Mr and Mrs Gough and their 2 daughters.

The LOVE NEST .. or parents retreat !

The Castle or Salt n Pepper (Aboriginals refer to them as ‘two sleeping dogs’.

Wayne has taken some amazing pictures of the Breakaways, but unfortunately they aren’t uploaded as yet ! Next time..

We’ve had a great week and it’s so nice to be out of the cold and rain !

The Morrells who are  travelling ! (shake it up a bit).