Snapshot of our 2nd week into our adventure (really our first week on the road). 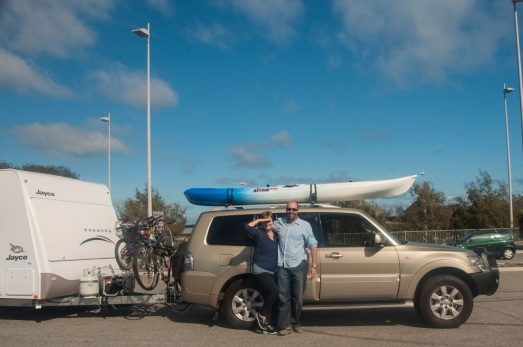 We wanted to leave Quinns really early and take off, but seeing how we’d stayed there a week we got to know pretty much everyone there, and they all wanted to come up and wish us well. It was after 11.30am before we were able to take off and start our travels. Once we were on our way though, we all felt pretty excited, nervous and were hoping that Frankie would behave in the car.

We made it to Merriden in the afternoon and set up for the night. Nothing much to see in Merriden, or if there was we didn’t know about it. It was basically a place to stay so that we could get up early the next morning and continue along to Kalgoorlie. As expected Frankie didn’t do too well in the car after the first hour or so. She’s not used to being in the car for that long, and even the Wiggles couldn’t calm her down at one point ! (she gets better though)…

We made it Kal just after lunchtime the following day and checked in at the Discovery Caravan park. I’m not sure what I expected in a 4 star park, but I was disappointed (to begin with anyway). It was all gravel and dirt, not 1 tree and hardly any grass. I think I’ve been spoilt in the past maybe, but I tried not to ‘whinge or complain’. We had our brand new van and who cares if the toilet block is one of those make shift ones (the other ones were being repaired). As it turns out our stay in Kalgoorlie was fun, we stayed 3 nights and the girls had a ball. We mainly did tourist things, like visit the SUPERPIT which the girls were in awe over. They also really enjoyed the Museum and finding out all about the gold and the mining. They were amazed at how the people lived in the early 1900’s and the little conversations they were having with each other was very cute..We also took them to the RFDS and they got to see and go into one of the planes. It would be very scary (for me) to live in such isolation and the RFDS do such an amazing job that I’ll donate to them every chance I get. . (pictures of Kalgoorlie).

Viewing platform at the Museum in Kalgoorlie.

Old friends of Wayne’s family told us about this place. They told us we MUST stay here when we start to cross the Nullarbor  and we’re so glad they told us about it. It was so unexpected. Full of trees and old stone cottages it was beautiful. It used to be a sheep station back in the early 1900’s so all the buildings remain, they are just camp kitchens and accom rooms now. They had 24 powered caravan sites and we got there reasonably early so were able to pick a nice spot between 2 trees. We even managed our first bike ride with Frankie on the back of Wayne’s bike. It was pretty cold, but they lit a campfire around 4.30pm and we made dinner in the camp kitchen which had a fire place too so we were warm enough. There were 4 friendly sheep on the station and lots of red dirt. The girls loved it. (pics below) 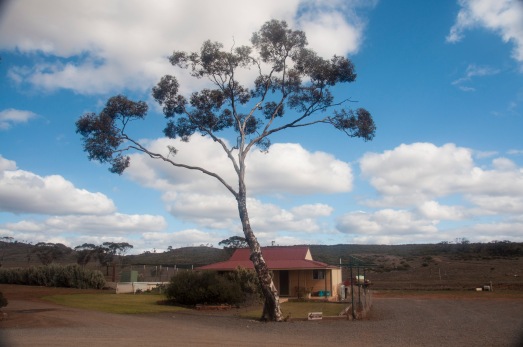 After the loveliness of Fraser Range Station I just assumed that all places along the Nullarbor would be as inviting and beautiful. I was wrong – plain and simple. After a few hours of driving we decided to stop, again just for 1 night and we chose Cocklebiddy for one reason only. There was NO WHERE ELSE. $25 a night with power (no water so went without a shower – I just couldn’t bring myself to use the ones they had available, not when I’ve been showering in my lovely hot watered shower in the van). I’m not sure how they get away with calling this place a ‘caravan park’ but it was.. I guess… Just a space, filled with gravel and a power pole. Can’t complain though, was a place to stop so we could make dinner and jump into bed (after a couple of glasses of wine) was very cold and very loud.

Glamping ? I think NOT..(that’s our friend Kevin coming over for ‘happy hour’.

Hello Eucla.. where the desert meets the sea.. something like that. We arrived at our next stop along the Nullar just after lunchtime again and this time we had a dirt gravel space reserved for caravans (with power but again no water) but this time we had an ocean view. It was amazing and again, so very unexpected ! We also could walk 2 mins and get a decent coffee and the kids had a little playground. I even managed to wash and dry a load of washing. Again though, it was only for 1 night.. (and I did have a shower) !

Nullarbor Hotel/Motel and the amazing ‘Head of Bight”

A few things happened along the way to our last stop along the Nullarbor. Firstly, our caravan dining room window blew off (without us knowing until we stopped hours later) and we saw the most beautiful whales and their calves at the ‘head of bight’ and the most breathtaking scenery. The Nullarbor Hotel/Motel was not dissimilar to Cocklebiddy in appearance but we were given an amazing sunset and as I said before, the whales were beyond  words. We were lucky to be travelling between the months of June – October, otherwise we wouldn’t have seen them. I’d like to mention that at this point in our trip we said goodbye to a lovely couple who we have become friends with. Margaret and Kevin who are in their early 70’s are travelling around for 3 months and are missing their kids and granddkids like MAD. We met them in Kalgoorlie and we just happened to be travelling across the Nullar at the same time. Everynight we had ‘happy hour’ and we shared the cooking etc. They doted on our girls and constantly told Wayne and I that we had a beautiful family and that I was a wonderful mother and Wayne was a good man. She often came over to the van to say that she heard us laughing and that it was a beautiful thing to hear etc.. I just loved her.. (not just because she told me I was lovely either) !! It’s nice to hear from someone who has ‘been there, done that’ and is still supportive and understands how parenting can be hard as well as rewarding.Olivia and Sarah (and Frankie) were spoilt rotten with hugs and lollies and this morning when we woke up and had to say good-bye they were a little sad.  Anyway, they were both so amazing and we will be catching up with them (and their grandchildren I hope) in Canberra on our travels.

Walking to the Bight to (hopefully) see some Whales.. 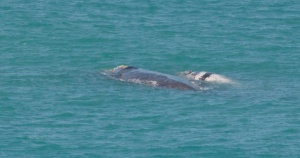 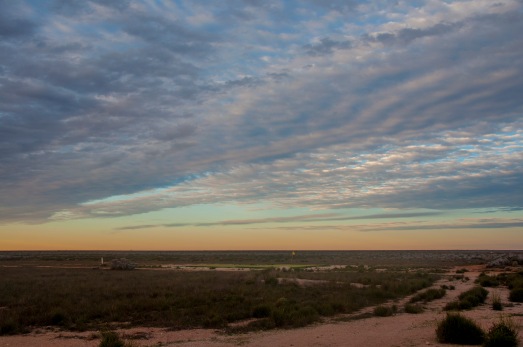 Sunset on the Nullarbor

Beautiful (and makes you forget all about the missing window)

So all in all we’ve had a pretty good 2nd week. Have driven over 3500km’s and Frankie has been a much better traveller the past 4 days. In fact I’d go as far as saying that Sarah is now the ‘one’ who is always asking one of 2 things ‘can I have a lolly’ and ‘how far is it until we get there’.. Once again I have to excuse spelling mistakes, it’s late and I’m so tired from sitting in the passenger seat for most of the day (I know, it’s hard for some)… so until next time…